Sign in
Create an Account
Or
Close Popup
2 Tutorials that teach Action Potential
Take your pick:
Previous Next

This lesson will examine how signals are sent amongst nerve cells to carry out a response.

Welcome to today’s lesson on nerve impulse and action potential. In this lesson today, you will be learning specifically about:

First, an electrical disturbance has to occur. Signals will reach the input zone of a neuron and those signals will change what occurs in the cell membrane of that neuron.

This electrical disturbance will cause sodium gates in the membrane of the cell to open which allows sodium to rush into the cell. Now normally in a resting membrane, the outside of the cell is positive relative to the inside of the cell. As these sodium gates open, sodium will rush in, causing more gates to open until that threshold we discussed is reached causing the voltage difference across the cell membrane is reversed.

Now in order for another action potential to occur, you have to restore the resting membrane potential which is done so by sodium/potassium pumps. To understand this, it is important to review the structure of a neuron here. A neuron is a nerve cell, and it's made up of dendrites, which are part of the input zone. Information will move through the input zone, through the dendrites, to the cell body. From there, the signal will travel along this long narrow part of the neuron called the axon, and then down to the axon endings. So information goes through the input zone, through the cell body, along the axon, to the axon endings. And then from there, that signal will be sent either to another neuron or to a muscle or a gland cell.

To better understand what happens in action potential, take a look at this diagram below. 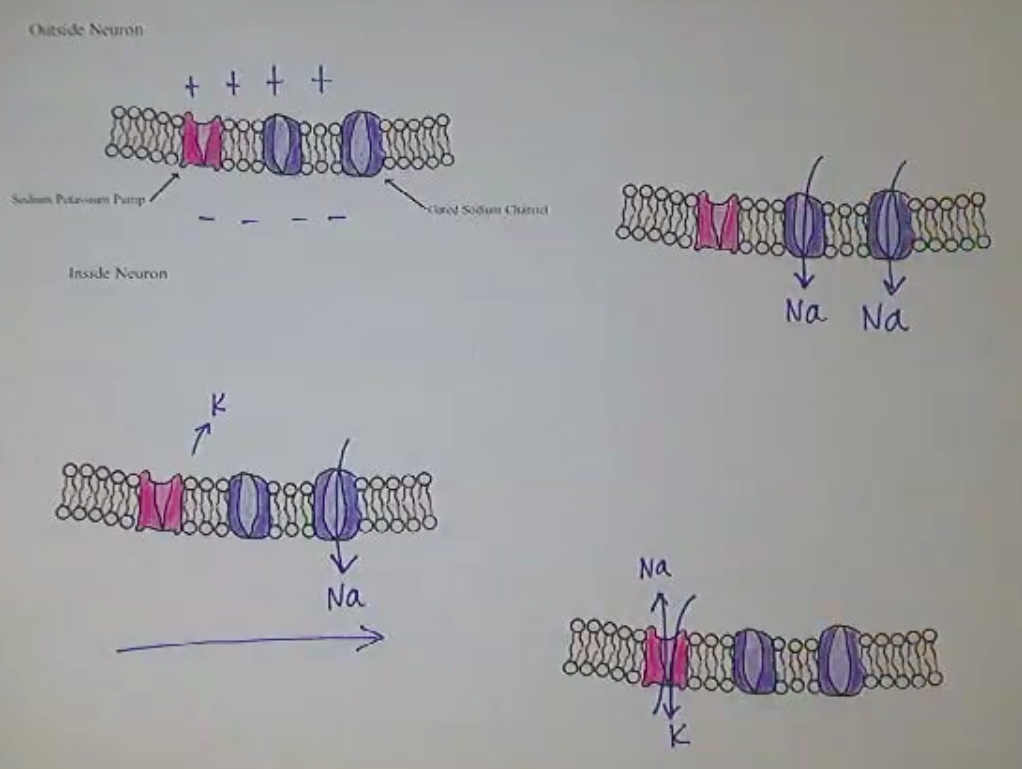 As mentioned, the outside of the neuron is generally positive relative to the inside. You have your cell membrane, and then embedded within that, you have something called a sodium potassium pump. Then you have your gated sodium channels which normally, these gated sodium channels are closed, making the cell membrane more or less impermeable to sodium. Sodium is not allowed to just flow through freely.

Now this isn't all happening throughout the whole membrane at the same time; it occurs in patches of the membrane. As sodium moves in to the cell in one patch, the previous patch of that membrane will allow potassium to leak out. This is happening reversing the voltage difference across the cell membrane and will cause the impulse to propagate along that cell membrane in patches.

Keep up the learning and have a great day!

Source: THIS WORK IS ADAPTED FROM SOPHIA AUTHOR AMANDA SODERLIND

The part of the neuron that consists of the axon where action potentials propagate away from the trigger zone toward the axon endings.

The region of a neuron where signals enter.

The part of the neuron that consists of the axon endings where signals are sent on to another neuron or to a gland or muscle cell.

The steady voltage difference that occurs across a neuron’s membrane when it is not being stimulated.

A protein that pumps sodium potassium against their concentration gradients to restore the resting membrane potential following an action potential.

The minimum voltage shift across a membrane required for an action potential to take place.

The part of the neuron located at the base of the cell body that initiates action potentials.